I met Wes Nations on a cramped, dusty bus in northwestern Vietnam, somewhere between Sapa and Dien Bien Phu. That was the time he saved me from peeing my pants.

We foreigners had been packed into the back of the bus, with luggage and linebacker-sized sacks of rice separating us from the Vietnamese riders (and the door) up front. Out the window an endless, muddy construction zone rolled by, like the backdrop to an old cartoon. It was the Vietnamese wild west: hastily-built replacement villages for those doomed to be flooded when the Ron River was diverted. Half-built shacks with tin roofs and tarp walls and bricks piled high in the yard. Chickens chasing under laundry hung across dank puddles. Kamaz earth-movers temporarily blocking the road. Our bus bucking like a bronco.

Ten hot, slow hours later, I was desperate for a wee. The bus stopped briefly in a small town to let off some passengers, so I asked the driver if I could hop out for a minute and find a place to squat. He waved his hand as if to shoo a fly, avoided eye contact, and shook his head. “No time!”

Whether it was my furrowed brow, the fear of sitting in a hot bus next to a woman wearing urine-soaked trousers, or just innate Southern gentlemanliness, Wes stepped in and convinced the driver to let me go. I don’t remember now what he said, but I was struck with his simple, no-nonsense reasoning. The gist was: Dude, don’t be a jerk. Just let the woman go pee. It was very Jedi-mind-trick.

My memory insists that he nodded and tipped his cowboy hat at me. Except there was no hat.

I got to know Wes Nations while riding motorbikes together around central Laos. I was to rendezvous with him and Stu, an Aussie Wes had met along the way, in the sleepy village of Tadlo. When I arrived, I found them on the little balcony that their rooms shared, with their feet up on the railing, drinking beer and watching a wide, gentle waterfall slide into a lazy river.

Wes and his Macbook on the veranda in Tadlo.

The next day we set out for Sekong, a small town up on the plateau. Wes and Stu were experienced riders, and I was nervous about being a burden. I needn’t have worried. We took things low and slow.

Wes was good-natured, patient and self-deprecating without being obsequious. He was about 6 foot 1, 40-ish, bald on top with very close-cropped grey stubble in a half-ring in back. Then there was the light grey soul patch, which not very many people could pull off as naturally.  He was a photographer and travel blogger with a great talent for telling stories – he called them “lies” – and capturing moments beautifully on camera. He had that slow, thoughtful calm of certain American Southerners – an ideal disposition for traveling in Laos, whose unofficial official quote is “Please Don’t Rush.”

Wes toppin’ up at the the petrol station.

Stu was a slightly grizzled Australian on his way home after spending 8 years working and traveling around Africa. He was shorter and more muscular than Wes, with a thick pile of straight grey hair that was receding slightly at the forehead. His demeanor was slightly intimidating in the way of cowboys and old-timers with experience etched into their faces. It took about a day, but once Stu realized that I wasn’t going to be a squealing, high-maintenance pain in the ass, we both relaxed and got on great.

For 5 days we three rode over red earth, under blue skies, and through the relentless green hills of the Bolaven Plateau, avoiding ruts in the dirt road and waving at energetic children shouting “sabaidee!”  The inconsequential but colorful events of those days – when we took a wrong turn, got caught in the rain (twice), danced to karaoke in an ill-camouflaged brothel, saw a half-dozen or so remote waterfalls, had my flip-flops stolen, nearly broke a leg riding down a near-perpendicular hill of scree, searched for The Ancient Stone, found and stole back my flip-flops, ate one of the top-5 meals of my life (for about $2 per person), rode to a town called “Buffalo Shit,” laughed about the proprietor of one of the hotels offering them (not me) “massages,” and…well, it was five days filled with the sort of moments that are typical while backpacking, while slow-traveling, while doing something as simple as riding bikes between tiny, remote villages. 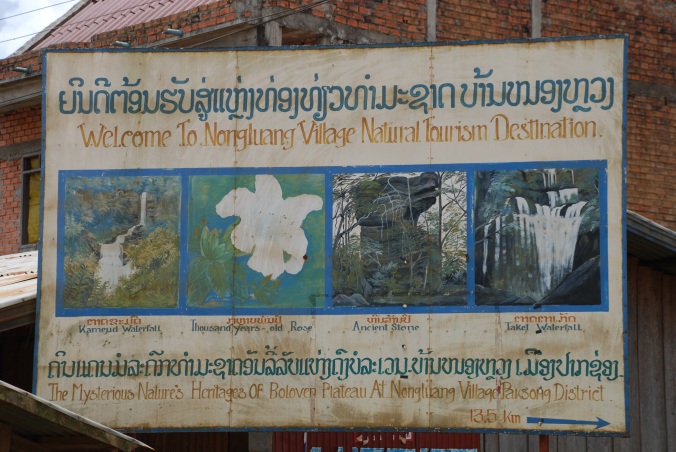 These moments seem more vibrant, more critical, more important than most of the others during my 17 months on the road. Perhaps it’s because many of those months were spent traveling alone, and moments shared are somehow seared more deeply into memory.

But I think that these moments are more meaningful because they were shared with Wes and Stu. Their travel mojo meshed well with my own: There was something unassuming in the way we all traveled – drama-free, yet still adventurous and worthy of late-night storytelling.

It’s a testament to Wes, who was the magnet that brought the three of us together in that time and place.

Some evil, lightning-fast disease struck its target with terrible efficiency, and carried away that Southern gentleman before I even knew he was sick. He’s just…gone.

I can’t ask him to help me remember our travels more clearly. We can’t trade lies and laugh. I’m left with my personal version of the story, unembellished by his wry grin, and duller for it.

Wes in the mist.

10 thoughts on “A Brief, Wondrous Time Shared with Wes Nations”